While there is existing documentation about “How Special is the 300M Special”, given we’re celebrating the 20th anniversary of the model, let’s dive a little deeper into how “Special” they really are.

The first appearance of a prototype “Special” was at a press conference for the 1999 SEMA show in Las Vegas Nevada. Tom Gale, Executive VP for Strategy & Design snuck into the press conference in the trunk of the car. 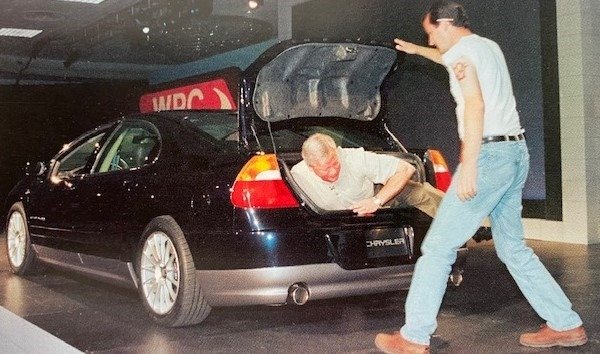 Note the First Gen taillights in this image.

Initially, in 1999, there were plans in place to make the 300M Special a true 300 Letter Car. Only a few of the concept plans actually made it into the production models released mid 2002 model year. (** In production)

Sadly, the transmission and other drive train components prevented the ultimate goal of 300HP but the engineers did manage 255 HP at 6500 RPM / 257 lb-ft Torque at 3900 RPM for the Special Engines. The tune with Dual Exhaust also met emissions without the use of EGR, and was higher than the Base M of 250 HP /250 Torque.

There is debate, still to this day, about the actual ride height of the Special cars. While the Factory Service Manual calls out the “Curb Ride Height” as the same for all 300M, LHS & Concorde models, every Special owner will confirm that the vehicle is lower than a base M. Is it 1″ or ½”? It really does not matter; you will catch or scrape the front or rear cladding on something you didn’t want to.

Having measured Base and Special front struts side by side and the are no exterior dimensional differences. It appears the height difference is in the Special body cladding, bumper covers and springs. Sales Brochures state “Sport Tuned with approximately ½ inch lowered body ride height”.

18” 15 spoke painted wheels, Special front and rear bumper covers and unique body side cladding, finished in a Dark Grey Metallic (Code SX9) are the first appearance giveaways. Repeater/Turn Signal mirrors, HID headlights, and dual exhaust round out the exterior differences. Obviously, 300M “Special” Badges announce to the world, this is something special.

Only two choices if interior color were available for all years, Light Taupe with Dark Slate Accents and Dark Slate Grey. The seats were unique with the “Waterfall” pattern base. The EVIC was standard along with the 360-Watt Infinity II Special Imaging Sound System. A 6 CD player was also standard for 2003 & 2004. Front doorsill plates greeted you as special along with a 150 MPH speedometer in place of the base 120 MPH. Additionally, carbon fiber trim was in place of wood throughout the dash and door panels.

Chrysler took the luxurious ride and comfort of a full-size personal luxury car and tweaked it just enough to get the attention of those looking for a sportier drive, and nailed it. The Special rides a little harder, (IMHO) handles like it’s on rails, and the extra HP & Torque along with the final drive ratio is just a blast to drive. Any and all the options available for the Base model were available on the Special. Such as the Sun/Moon Roof, Cold Weather group, Side Air Bags to cite a few examples.

Everybody Wants to Be Special:

In the early years Base M’s outnumbered the Special’s at meets, yet today it at least appears there are more Specials. Not that there was a huge up charge for the Special, it just happened that way. At Carlisle, the club has had so many M’s represented that there are separate award categories for Base and Specials.

Almost everyone has upgraded to HID headlights and signal mirrors from the Special and Special Sway bars were in high demand.

For $20 you could get a factory fresh rear one. (Obviously miss priced by Chrysler.) Bumper covers and side cladding were scooped out of the salvage yards and many Special clones are out there today. The only real way to be sure is to check the VIN, 8th Digit G is a Base, K and it’s Special.