WHAT DID YOU DRIVE?

General Discussions about the 300M

Re: WHAT DID YOU DRIVE? 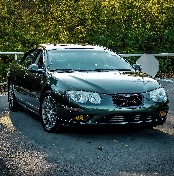 Considering my age I haven't owned that many vehicles. I've always bought nice, privately owned cars. I've always paid cash and never owed a dime on any vehicle. I've done 90% of repairs and upkeep myself but now I just do the routine maintenance myself as I'm old and lazy

1967 Ford LTD bought used. My first car. I didn't buy my first car until I could pay cash for it hence I was 18 before my first car.
1969 Chevelle 2 door hardtop bought used. 350 auto with buckets. Nice car. Sold it at a profit 3 years later.
1970 Ford LTD Brougham bought used. Had the police interceptor package (429 high compression big block, H.D. suspension with huge front and rear sway bars, HD cooling, 410 posi). Found this sitting in the back of a Ford dealer lot. Nobody wanted to buy it as it had high mileage and didn't have AC. I contacted the owner (a border customs broker who drove it on the hwy every day to Toronto airport) and bought it from him. Fastest car I ever owned except for my hot rod truck. . Stored during winters. Owned for about 10 years.
1968 Dodge Monaco bought used. Winter driver for 2 years
1975 Pontiac Gran Prix . 455 Big Block fully loaded. I bought this 6 months old. It was my summer daily driver, stored for winters. Nice car. I owned it for 30 years. Sold it for more than I paid for it.
1975 Mercury Grand Marquis bought used from a local wrecking yard. Had high mileage. Fully loaded with 460 engine and leather. Nice car but a pig on gas and got rusty fast. Winter driver for 5 years and towed my trailer with snowmobliles during winter.
1975 Chev Caprice bought used from a friend. Fully loaded.My wife's summer driver, our winter driver. Rusty when I bought it but drove it for 7years.
1977 Chev Monte Carlo. Fully loaded. Bought off of a friend. Wife's daily driver. Nice car. Scrapped after rust out.
1977 Chev Smoothside Shortbox Pickup. I bought it 6 months old from a divorcing couple who needed the cash as they owed most of the money still on the truck. Drove it for 6 months and then did a complete body off resto. 4 inch chop top, lowered suspension, shaved doors, smooth tailgate, custom interior, etc. 350 LT1 turbo 400 with 3500 stall converter, 3.73 Dana posi rear end. First painted in tuxedo black then 5 years later changed to candy-brandywine with flames. Won every car show I ever entered in. Kept for over 30 years. Sold it for what I had into it. Sometimes I still miss it. There are pictures of it somewhere in the forums here.
1980 Olds Regency 98. Bought used. Rare 2 door hardtop. Fully loaded with leather and sunroof. Wife's daily driver and our winter car. Drove it for 10 years.
1985 Olds Delta 88 Brougham. Bought used. Fully loaded 4 door. Wife's daily driver and our winter car. Drove it 8 years
2002 300M
2010 Ford Ranger 4x4
I also owned a 750 Honda and a KZ900 Kawasaki motorcycles each bought new in 1974 and 1976 respectively.
2002M Light Almond Pearl Metallic PHP. Ride Of The Month Winner.